Don McLaughlin, born Oct. 24, 1927, in Chester, Pa., literally grew up in rodeo arenas, working as a trick roper as a child. He went on to win four consecutive world championships in tie-down roping and added a fifth title three years later. He also won three world titles in steer roping. McLaughlin was the epitome of steadiness under competitive pressure. Nothing bothered him. He loved to have fun, as well as to win. He had extraordinary “cow sense.” Months after seeing a calf, he would recognize it and remember what it did when roped. Always thinking, McLaughlin innovated a new style of tying calves. Instead of taking the first two wraps around all three feet, he shaved time off by taking only one wrap around the back feet, then cinching the tie with a final half-hitch. He died July 20, 1994. 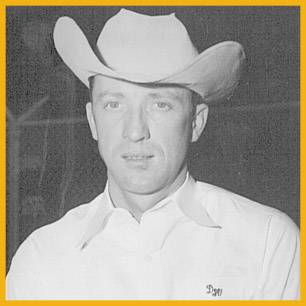