Stock contractor James Sutton produced his first rodeo in 1926 at the family ranch in Ager, S.D., and continued his involvement in professional rodeo until his death Feb. 1, 1991. Born Dec. 5, 1899, in Sully County, S.D., he earned the rodeo world’s respect for his fairness to the cowboy, the committee and the spectator. For nearly two decades, he contracted stock with fellow South Dakotan Erv Korkow until Sutton Rodeos, Inc. was formed in 1968. Even after the management was transferred to his son, Jim, the elder Sutton remained active in the company, The Suttons have produced some outstanding rodeo stock, notably Baldy, top bull in 1961; the legendary Yellow Jacket, runner-up as top bareback horse in 1964; and Deep Water, tied for 1979 saddle bronc of the year. In 1970, Sutton received an award of merit from the Rodeo Cowboys Association for his contributions to the sport. 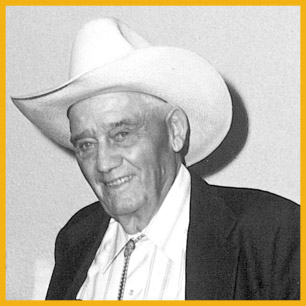