The late Doc Sorensen was a man of many hats – football player, veterinarian, politician, mayor, legislator, law enforcement officer, but mostly, he was a cowboy.

He and the late Everett Colborn founded the Colborn & Sorensen Rodeo Co. in the early 1930s and produced rodeos throughout the Northwest. When Colborn moved to Texas, Sorensen and his family created the Flying U Rodeo Co. and produced the Las Vegas (Nev.) Helldorado Rodeo for 17 years, the Caldwell (Idaho) Night Rodeo for 21 years and provided stock for the Cheyenne (Wyo.) Frontier Days for many years. After 30 years in the stock contracting business, Sorensen sold the outfit to Cotton Rosser of Marysville, California.

Sorensen attended Colorado A&M, where he played football and graduated with a doctorate of veterinary medicine. He had a vet practice for several years. Sorensen stayed very busy by serving as a state brand inspector, an Idaho State Legislator, Idaho State Director of Law Enforcement, Mayor of Roberts, Idaho, and the director and manager of the Idaho State Fair, where he later served as the Grand Marshal of its parade. He was named Jefferson County Senior Cattleman of the Year in 1981, due in part to being the first person to have Black Angus cattle in the state of Idaho. He was inducted into the National Cowboy Hall of Fame in Oklahoma City in 1988 and was inducted into the Idaho Hall of Fame in 2000. 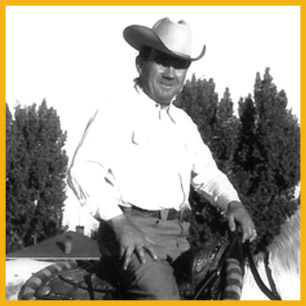