Jack Roddy, born Oct. 3, 1937, in San Francisco, competed in his first RCA rodeo at the age of 14 and won $90 in the wild horse race. Early participation in rodeo was not unusual for the youngster who grew up on the family ranch near Colma, Calif., riding and roping with his father’s friends in the rodeo business. In 1956, he joined the RCA and competed around the country, entering all the events. His lanky, 6-foot, 5-inch frame didn’t fit the usual cowboy mold, but it didn’t keep him from becoming college rodeo’s all-around champion in 1959. Adding weight to his height, Roddy became a powerful force in steer wrestling in the early 1960s. He went to the National Finals Rodeo for the first time in 1962. In 1966, he won the world championship in steer wrestling, setting a record for total earnings in the event. 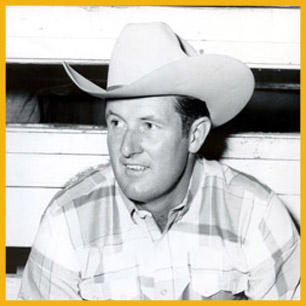