One of the most accomplished bulldoggers of his generation, Byron Walker is part of a rare two-world championship household. He won his steer wrestling gold buckle in 1981 and his wife, Mary, was the barrel racing world champion in 2012.

Trained by his father, “Whitey Bob” Walker, and four-time World Champion Jim Bynum, Byron qualified for his first National Finals Rodeo at 19 – the first teenager ever to qualify for the NFR as a bulldogger – and went back the next year as the regular-season standings leader.

“Being second to Roy Duvall, that’s a pretty good short list right there,” Walker said, “but I think I am most proud of being a pretty good cowboy. I was good (in all different setups). My dad taught me everything I know about steer wrestling and Jim Bynum taught me how to win.” 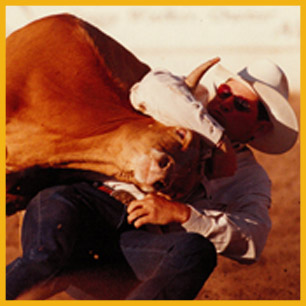