Bill Pickett, born in 1870, is credited with founding bulldogging or steer wrestling, as it is known today. Legend has it that Pickett resorted to biting the lip of a recalcitrant steer to wrestle it to the dirt to get it into the corral. Pickett moved from ranch work into the show arena in the 1890s, when he and his brother began the Pickett Brothers Bronco Busters and Rough Riders Show that toured fairs and rodeos. In 1907, Pickett was hired as a cowhand on the 101 Ranch in Oklahoma and participated in the Miller Brothers’ 101 Ranch Wild West Show. He worked on the ranch when he was not traveling with the Miller Brothers for more than 25 years.  He died April 2, 1932, after being kicked in the head while breaking a colt at the ranch. He was later honored by the U.S. Postal Service, who featured Pickett on a stamp as part of its Legends of the West series. 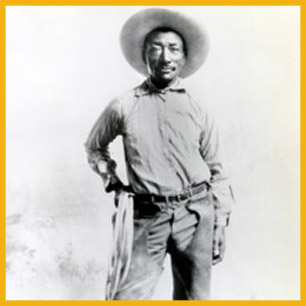