The son of a National Rodeo competitor, Jim Davis had a rope in his hand from the day he was old enough to walk and never stopped practicing, working his way to status as one of the most consistent and successful steer ropers in the sport’s history.

“If this buckle were awarded for pure dedication,” said Davis’ wife, Lezlie, after the first of his world championships, “Jim would have won it a long time ago.”

Davis’ father, Merle, often took his sons, Jim and Lee, with him to rodeos during the summer months so they could learn about the sport. Jim competed in his first rodeo at 7, joined the PRCA at 17 and received rodeo scholarships to Casper (Wyo.) Junior College and the University of Southern Colorado in Pueblo.

While Davis did compete in tie-down roping and team roping, he was always primarily a steer roping specialist like his dad Merle made the NFR in 1959 coming along at a time when the event was growing dramatically in terms of prize money and recognition under the leader ship of James Allen. Davis also has served as horse trainer and a steer roping contractor in partnership with his father-in-law, Jimmy McNeil. 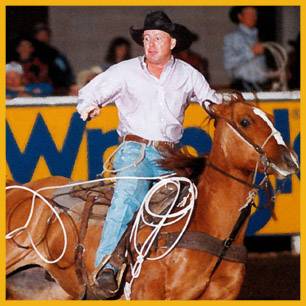