Dennis Reiners, born Oct. 17, 1937, in Clara City, Minn., grew up on a farm. He started his bronc riding career after watching the flamboyant Casey Tibbs ride in Clear Lake, S.D., in 1950. He went on to qualify for nine National Finals Rodeos in the 1960s and 1970s, claiming the world saddle bronc riding title in 1970. In 1965 Reiners won the NFR bareback riding aggregate title, finishing as the only man to ride all eight horses. He went on to win the saddle bronc riding aggregate crown at the 1973 NFR. These feats place him in a select group of NFR competitors to win aggregate titles in at least two events. Reiners competed in PRCA rodeos as late as 1990. Today, he judges and leases bucking stock at various rodeos, staying in the rodeo game he loves. 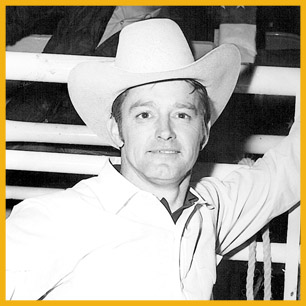