Harry Knight, born in Quebec City, Canada, in 1907, learned to pack horses as a youngster at a Banff, Alberta, lake resort operated by his father. In 1935 he entered his first saddle bronc riding event in Sundrie, Alberta, and began a half-century career in rodeo. Those who knew him say it is hard to reconcile the quiet, silver-haired man on horseback directing arena action with the wild-spurring saddle bronc rider who won the title in Canada in 1926 and 1932. Knight, nicknamed “Stormy,” never won a U.S. rodeo. At the Fort Worth (Texas) Stock Show Rodeo, he once won nine of 11 go-rounds, bucking off once and losing a stirrup to disqualify once. In 1939 Knight was an original partner in the World Champion Rodeo Co. He sold out three years later, but returned to stock contracting in 1954 to manage the late Leo J. Cremer’s stock for a new owner, Gene Autry. When Autry bought all the World Champion Rodeo Co. stock and merged it with the Cremer string, Knight managed it until he retired in 1968. Showing his dedication to rodeo, Knight served as the first PRCA stock contracting representative on the Board of Directors from 1966-76. Knight died April 5, 1989. 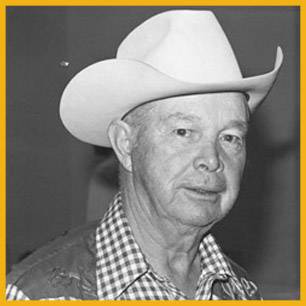