Eldon Evans’ father threatened him with his life if he ever became a rodeo cowboy. While he never competed in the arena, Evans of Twin Falls, Idaho, did become a true friend of the sport. He has given countess hours to the PRCA for more than 20 years. A certified public accountant by profession, he first served as the financial advisor in 1981, was on the steering committee during the reorganization of the association, was an interim co-commissioner and also served on the board of directors from 1988-96. He was named PRCA Rodeo Man of the Year in 1987. Evans, a veteran of the Korean War, was a founding father of the College of Southern Idaho and served on the board of trustees for 12 years. In 1965, he was named Man of the Year by the Twin Falls, Idaho, Chamber of Commerce. His wise counsel has helped guide the association through turbulent years. His peers believe he has always had the best interest of all of the aspects of the rodeo business at the top of his priorities in his decision-making. 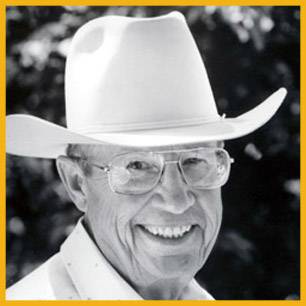