Often identified as the most talented bull rider never to win a world title, Denny Flynn, of Charleston, Ark., qualified for the National Finals Rodeo 10 times (1974-82, 1985) and set a record for most bull riding average titles won at the NFR (1975, 1981-82), later equaled by Jim Sharp. Flynn finished second in the PRCA season standings three times, losing the 1980 world title to Don Gay by a mere $188 and the 1978 PRCA title by just $283. He also finished third in the world three times. His 98-point ride on Tommy Steiner’s Red Lightning at Palestine, Ill., in 1979 was a world record for a dozen years and remains the second-highest score in ProRodeo history in any roughstock event. Flynn’s 92-point score on a bull named Ed Pivik at Cheyenne (Wyo.) Frontier Days in 1974 stood as the arena record for 15 years. Flynn was legendary for his toughness. He nearly died from being gored by a bull in Salt Lake City in 1975, but came back to compete two months later. He suffered a concussion in the sixth round of the 1981 NFR when a bull fell on him, but rode nine of his 10 bulls to win the average. A year later, he broke his ankle in the ninth round but returned in a cast to mount his 10th bull, which he needed to win the NFR average again. 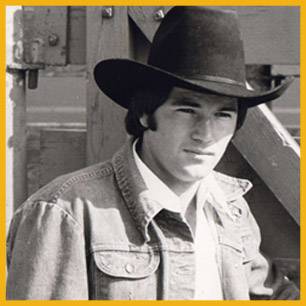