Charles Wilken, known to everyone as Lefty, was born in 1920 in Valentine, Texas, to a family of pioneers who made their living with mules and wagons. At a very early age, Wilken was riding horseback and packing a rope. He was an outstanding athlete competing in track and field, as well as basketball where he mastered the art of shooting with either hand. He joined the Cowboys’ Turtle Association in 1942 and competed in tie-down roping and team roping, as a header and heeler. Wilken also worked as a pick-up man for Beutler Brothers Rodeo and was known for his horsemanship skills. He worked as an NFR pick-up man a record 10 times, sometimes chosen by committeemen, but more often by the cowboys who wanted the best. He listed being a cowboy, roping and riding as hobbies but instead they were more like his life. 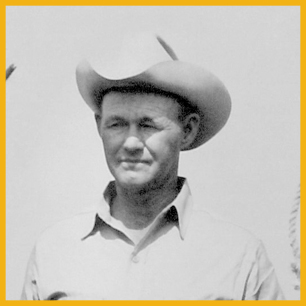