Benny Binion was born on a Texas farm in 1901 and began trading horses for a living when he was just 10 years old. Through the years, he raised some of the best bucking and pickup horses in rodeo. ProRodeo Hall of Fame stock contractors such as Harry Knight, Lynn Beutler, Harry Vold and Mike Cervi have owned Binion horses. Binion worked for 30 years to bring an invitational rodeo to Las Vegas. In 1985, wanting to help both his cowboy comrades and the town, Binion accomplished his goal with the move of the National Finals Rodeo from Oklahoma City to Las Vegas. In the ensuing 20 years, the NFR has become one of the top tickets in sports and one of Las Vegas’ most prestigious and lucrative two weeks of the year. In 1985, the PRCA named Binion ProRodeo Man of the Year. Binion played a significant role in the evolution of ProRodeo – from his sponsorship of a Winston Tour outfit, his influence in the NFR move and his sponsorship of NFR contestant entry fees. Despite his death in 1989, Binion’s legacy lives on during each round of the NFR when the flashy red stagecoach bearing his name and drawn by six Quarter horses makes its way around the arena. He never climbed over a chute gate, but Binion carried the spirit of the cowboy in his heart. 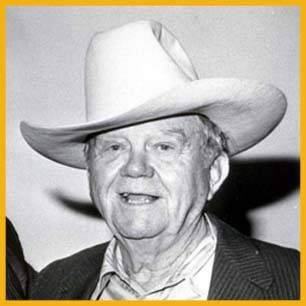