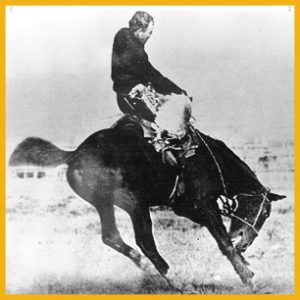 Rarely did cowboys make a successful ride on the bronc Steamboat. This 1,100-pound Wyoming ranchland horse first attracted public attention at the Festival of Mountains and Plains in Denver in 1900. Bronc riding in the early days of rodeo was far different from what is seen today; horses did not exit from chutes, but were snubbed to the saddlehorn of a rider while he mounted and then turned loose. Horses were ridden for 30 seconds or more, sometimes until they stopped bucking. Arenas were often any impromptu open area where the audience could form a circle of wagons, automobiles, mounted riders and people on foot. Steamboat was probably as widely known as any bucking horse of the era because of his association with famed rodeo producer, C. B. Irwin, who traveled widely and brought rodeo to cities and towns nationwide.