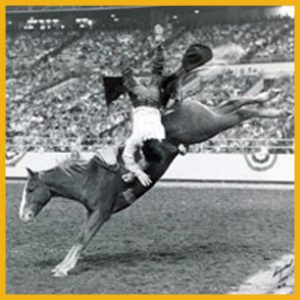 Skoal Sippin’ Velvet originally named Abdallah, was sired by a direct descendant of the famous Man O’ War named Grand Admiral and the NFR bucking mare named Sweet Thing. He was born on the Hoss Inman, Flying I Ranch in Lamar, Colo. Abdallah became an outstanding bucking horse and a real favorite of the rodeo crowd. The bronc was sold to Texas stock contractor Bernis Johnson in 1976 and his name was changed to Sippin’ Velvet in 1978 as part of the Black Velvet stock contractors’ award program. Sippin’ Velvet was named Bareback Horse of the Year five times in his career; five times he was voted second or third top horse at the National Finals Rodeo; and six times he was named top horse in the Lone Star Circuit. In 1986, at 17, he was the first horse to be included in the Copenhagen Skoal stock contractors’ award program. After 18 NFR appearances, taking riders to the pay window on a consistent basis and earning good checks for the B-J, Johnson decided to retire Skoal Sippin’ Velvet in the arena at the 1994 Finals. The big-hearted bronc died at the age of 26 and was buried at the Johnson home.