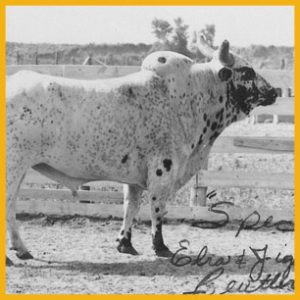 Cowboys called him Old Spec, not with affection but with respect for the curiously spotted, cross-bred Brahma bull that in 350 attempts, over a seven-year bucking career, allowed only seven riders to make qualifying rides. It was a ratio of 50 to 1, in favor of the 1,700-pound animal. At the 1959-60 National Final Rodeo, where only the nation’s top stock appear, Spec was awarded plaques as the best bucking bull. Purchased in 1957 as a 4-year-old by stock contractors Elra and Jiggs Beutler from Tom Harlan of McLean, Texas, Spec was first ridden by former world champion Harry Tompkins that same season. Three years passed before anyone else accomplished the feat. Last to ride Spec, who had a penchant for turning on a fallen rider, was an Oklahoman Pat Scudder in 1964 in Coffeyville, Kan.