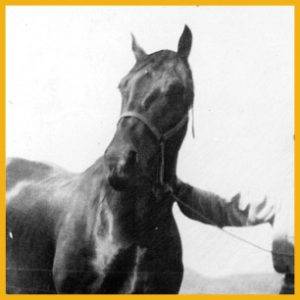 The Canadian horse, Midnight, began his rodeo career by bucking off his owner, Jim McNab, after a car backfired. McNab then sold the black horse to stock contractor Peter Welch and Strawberry Red Wall, producers for Canadian rodeos in the 1920s. After acquiring, Midnight, they increased their string by adding a smaller black horse called Tumbling Mustard from a Sarcee Indian reservation. Col. Jim Eskew, a noted Waverly, N.Y., producer of eastern rodeos, bought the pair and then sold them to Verne Elliott and Ed McCarty. Ringbone disorder forced Midnight into retirement in the mid 1930s.