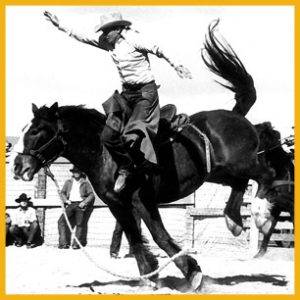 Described by world champion saddle bronc rider Gene Pruett “as the greatest bucking horse in history,” Hell’s Angel usually left the chute with a high wrenching kick that gained impetus from striking the back of the chute. The 1,300-pound Percheron Pinto cross began his career with Montana stock contractor Buck Yarborough and was discovered in 1932 by Mike Hastings, scouting for Texas stock contractor W.T. Johnson. Hell’s Angel died of lockjaw in 1941.