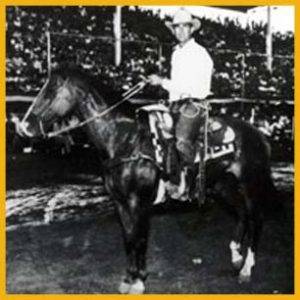 Bullet, sired by noted Quarter Horse Jack McCue, may have begun his rodeo career as a tie-down roping mount in the 1930s, but he achieved his fame as a steer roping horse. Roy and Pat Lewis sold the 1,000-pound sorrel gelding to veteran roper Bob Crosby. In 1941, Ike Rude capitalized on his own skill and Bullet’s quickness and strength to win the world steer roping championship. The following year, King Merritt rode Bullet to the world title. Bullet continued to perform consistently, winning two more world titles in 1947 and 1953 with Rude in the saddle.