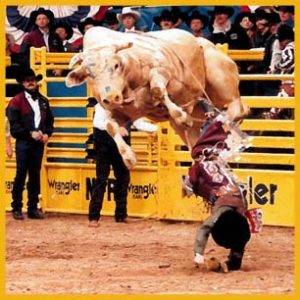 Perhaps no bucking bull in ProRodeo history was as feared as Bodacious, a 1,900-pound cross-bred charbray that burst upon the scene in 1992. In four years, Bodacious was virtually unrideable. All muscle, the bull with the distinctive yellow coloring bucked off 127 of his 135 riders and became known for a bone-crushing style that sent many riders to the hospital, including world champions Tuff Hedeman and Terry Don West. Bodacious was known for his explosive exit out of the chute. He started out with such force it was not uncommon to see his belly from the top of the back of the chute. He was first ridden in 1993, and it took two years before another bull rider stayed on for eight seconds. His ability to buck riders off before they could nod their heads did not endear him to the cowboys. For his efforts, Bodacious was named PRCA Bull of the Year in 1994-95 and top bull of the National Finals Rodeo in 1992 and 1994-95. Owners Sammy and Carolyn Andrews retired Bodacious during the 10th round of the 1995 National Finals Rodeo. Until his untimely death in 2000, Bodacious spent his time in his home pasture, passing on his genes to future bucking stars.