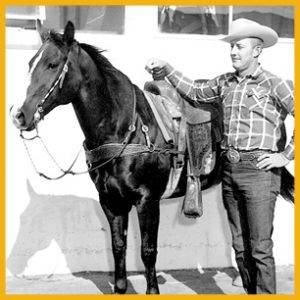 From 1953-60, Baby Doll earned more than $400,000 for her owner, the late, Willard Combs of Checotah, Okla. She carried Combs’ younger brother, the late Benny Combs, to the world steer wrestling title in 1955. In 1957 she took Willard Combs to the world championship. Sired by Oklahoma Star, Jr., the capable Doll had more fans than the men who rode her. Baby Doll’s popularity increased after she was featured in a 1958 Life magazine article. A score of contestants from across the nation attended her burial in 1960.