Montie Montana, whose first trick roping performance was at the 1925 Miles City, Mont., rodeo, claimed each performance was just as exciting to him as that first one. At 17 he joined the Buck Jones Show, trick roping and riding and training horses. Arena announcers had difficulty with his name – Owen Harlen Mickel – and usually introduced him as “Montie from Montana.” In 1929 he adopted the name and used it his entire career. Montana joined the professional ranks in 1938 and starred in every major arena in the United States, Mexico, and Canada, as well as many other countries. Montana’s trademark was black and white pinto horses, every one of them named Rex. He and the “Rexes” rode in every Rose Bowl Parade dating back to 1932. Montana, born June 21, 1910, near Wolf Point, Mont., said he was more fortunate than most performers. His trick roping, along with his horses, was his business, as well as his hobby. He died May 28, 1998. 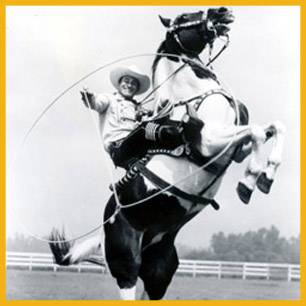