Jo Decker wore many hats during her rodeo career. She started her career shortly after high school as one of the “Ranch Girls” at the Madison Square Garden Rodeo. She was known as a consummate horsewoman and better able to diagnose a problem than the local veterinarian. At the first National Finals Rodeo in 1959, she carried the American flag, helped organize the event and filled the role of production coordinator. Over the years Decker worked as a rodeo secretary for some of the biggest names in the stock contracting business, including Beutler Brothers, Harry Vold, Mike Cervi and Hoss Inman. She was the secretary at the National Finals Rodeo six times. Decker’s success as a rodeo secretary came from her ability to understand problems encountered by cowboys, stock contractors and judges and offer solutions to ensure a successful rodeo. She has been described as having the biggest heart in rodeo, always willing to help anyone and with the best interest of the sport in mind. 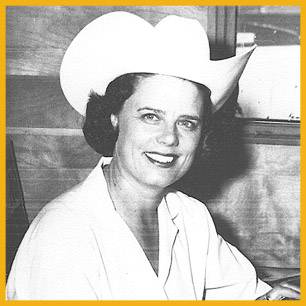