Jerry Olson grew up on ranches, always around horses and cattle. He entered his first rodeo at age 12, competing in bareback riding, saddle bronc riding and tie-down roping. At about the same time, the Olson family put together a horse act they contracted to local rodeos. The act evolved to the famous Roman riding act used by Olson throughout his professional career. By the mid-1950s the famous Olson buffalo act was on the road. Audiences were thrilled at the sight of Olson riding the buffalo (first Pat, then Sam and later Chief) around the arena, completing the act by riding into the trailer. The ’50s also saw Olson begin his bullfighting career somewhat by accident when the scheduled bullfighter was a no-show at a rodeo contracted by his father. Olson, born Nov. 22, 1935, in Sturgis, S.D., is known best by rodeo fans for his great acts, winning Specialty Act of the Year in 1983. The other side of Olson is that of a tough competitor in steer wrestling, making it to the 1969 National Finals Rodeo. He was also selected as NFR bullfighter in 1973 and served two terms as specialty act representative on the PRCA Board of Directors. He is one of only three people to have worked the NFR as a contestant and specialty act. 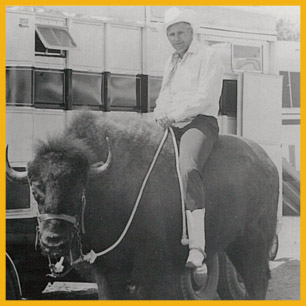