Jay Sisler didn’t plan a career in rodeo. Born Feb. 20, 1926, in Gem County, Idaho, he was breaking horses for a living with the help of two cattle dogs – Stub and Shorty – when the promoter of a rodeo offered him $10 to perform with the two dogs. That contract led to touring state fairs and the Seattle World’s Fair with Roy Rogers. As Stub and Shorty aged they were replaced with a succession of new dogs, a total of 17 over the years. Sisler’s dog act, which included jumping rope, head stands and see saws, was a hit at Madison Square Garden, Boston Garden, the Cow Palace, Calgary and the Snake River Stampede during the 1950s and 1960s. Sisler and the dogs appeared on the Ed Sullivan Show, and the dogs played lead roles in Disney’s Cow Dogs and Stub: Best Cow Dog in the West. Other film credits include Greta the Misfit Greyhound, Run Appaloosa Run and A Man Called Horse. Sisler is remembered as phenomenal animal trainer with unique acts not seen before or since. Sisler died July 8, 1995. 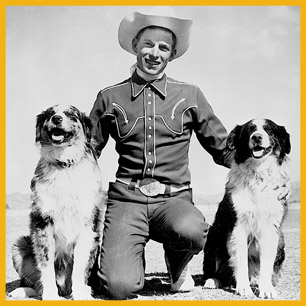