He was the first professional rodeo barrelman/clown. Extremely short-legged and slow, Fulkerson needed a sanctuary in large arenas, so he built a barrel reinforced on the outside with old automobile tire casings. His frantic dashes to the barrel and plunges into it inspired awe and applause from rodeo crowds nationwide. Fulkerson was also one of the first rodeo clowns to have a world-class animal act. His mule, Eko, was almost as famous as Jasbo himself. Eko would lie down on command, walk on his back feet, count to 10 with a pawing foot, whisper in Jasbo’s ear and lie on his back while Jasbo sat astride his stomach. They performed together for more than 20 years, until the famous clown’s death in 1949. 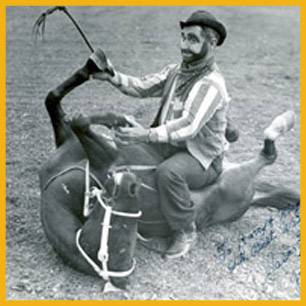