Known as the “First Lady” of rodeo, Ellen Backstrom, born Sept. 9, 1929, in Missoula, Mont., began her rodeo career as a young child, singing during intermissions for her father’s productions. After years spent as a bookkeeper, she decided to hit the barrel racing circuit. She filled in as a timer and rodeo secretary and found her true calling, becoming a full-time rodeo secretary in 1969. She said, “I realized I could make more in a month as a secretary than I could in a year as a contestant!” During her career, Backstrom worked for most of the big name stock contractors and at major rodeos in Denver, San Antonio, Houston, Fort Worth, Texas, San Francisco, Albuquerque, N.M., and Phoenix, as well as hundreds of small rodeos. In 1973 she was the rodeo secretary for the National High School Finals, the College National Finals and the National Finals Rodeo. She was the NFR secretary four times between 1973 and 1982. Backstrom was elected as contract personnel director in the late 1970s, making her the only woman ever to serve on the PRCA’s Board of Directors. Cowboys honored Backstrom in 1984 by presenting her with a world champion secretary buckle. She died March 22, 1988. 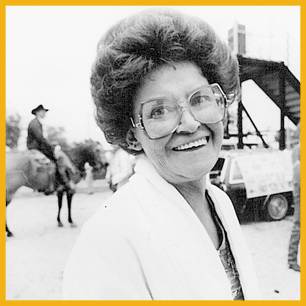