Known to all in rodeo as the “Kajun Kid,” Dudley Gaudin left Baton Rouge, La., at the age of 15 to ride bareback horses and bulls with a Wild West show. When the show broke up, he went to Texas to enter rodeos as a bull rider. Gaudin, born in 1929 in Baton Rouge, was soon taking jobs as a bullfighter and got his big break in 1954 when he worked the Madison Square Garden rodeo in New York. In 1952, he joined the RCA as a contract member. The Kajun Kid’s daring skills and fearless reputation earned him a 25-consecutive-year contract with the Houston rodeo. He was also asked to serve as the bullfighter for the first National Finals Rodeo in 1959, then again in 1960 and 1970. He retired in 1979 after 27 years as a professional rodeo clown. 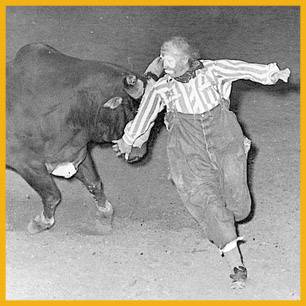