Known as the voice of Cheyenne Frontier Days for 26 years, Chuck Parkison started his rodeo career as a bareback rider, bull rider and sometime chute boss. Born Dec. 30, 1918, in Rapid City, S.D., his announcing career began in Los Angeles in 1947 when the regular announcer failed to show. In addition to announcing Houston for 24 years, Gladewater, Texas, 36 years, and the NFR, six years, Parkison was a member of the Screen Actors Guild and worked as a public relations representative for Tony Lama. Parkison’s philosophy that the was the liaison between the chutes and the grandstand was clear, “The most important thing is to make it simple, to explain an event and try to make it interesting. You’re (the announcer) the go-between the action and the audience.” Parkison died July 27, 1988. 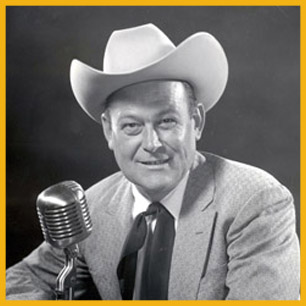