Andy Womack was a successful Phoenix building contractor who developed and built the largest single housing project in Arizona using the assembly line process.  His stint as three-time chairman of the Jaycees Rodeo of Rodeos in Phoenix sparked his interest in the sport, where he developed close friendships with clowns Jasbo Fulkerson and George Mills.

In 1939, Womack traded his construction company career for a rodeo clown costume.  He patterned  his face makeup and costume after Fulkerson, as a tribute to that clown.  Womack was the first clown to intorduce a chimpanzee, Couisn Hugo, to his act.  Hugo did trick riding exhibitions with Dynamite the mule, rode bucking horses, and worked the bull riding event from atop a hanging dummy.  Womack and his animal partners worked Madison Square Garden, the Cow Palace, and numerous other rodeos.  They also appeared in the movies Bus Stop with Marilyn Monroe and This Way Joe with Elvis Presley.

In 1949, Womack returned to Phoenix and the construction business, keeping his rodeo clown act as a hobby for forty more years.  When others would have contemplated retirement, Womack put on the makeup and costume once more for the Old Timers Rodeo Circut.  His rodeo career spanned more than fifty years.  He worked with all the greats of the clown world – George Mills, Leon Coffee, Slim Pickens, Wilbur Plaugher, and many more. 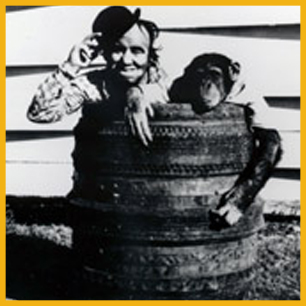