Ken Roberts, born Jan. 22, 1918, won three consecutive bull riding championships after beginning his rodeo career with the Clyde Miller Wild West Show as a three-event contestant in 1933. His first ProRodeo bull riding victory in Chicago in 1936 encouraged him to enter the professional circuit full-time. The following year he won all three riding events in Chicago, which included making a qualified ride on Yellowstone, a bull never before ridden. Growing up in a rodeo family, Roberts got his start bucking animals out of a shotgun (front-opening) chute on Sunday afternoons. With his father, Roberts went into the rodeo stock contracting business in the mid-1940s, but he continued competing and won day money in the bull riding in Denver’s National Western at age 50. He died Sept. 13, 1975. 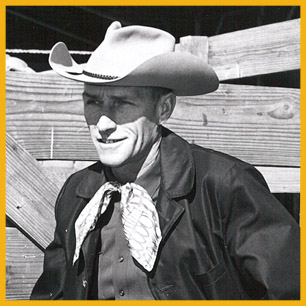