Johnie Schneider, born in 1904 in Stockton, Calif., had a soul of a poet and the heart of a cowboy. He began rodeoing in 1923 and quickly established a reputation as one of the most versatile performers around. He competed in bull riding, saddle bronc riding, bareback riding, steer roping and tie-down roping. “I went to winning right away, placing in the money several times in my first nine shows,” he said. By the time of The Great Depression, Schneider was earning a good living, carefully saving his money so that he could buy a ranch and some cattle. He retired from competition in 1940 to that ranch and became a highly respected brand inspector for the state of California. He died April 4, 1982. “The best thing about rodeo was that it gave a lot of us a start in life. There weren’t many options back then for a fellow trying to make it,” he said. 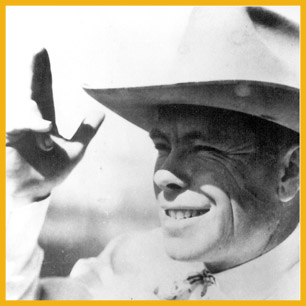