Born October 6, 1965 in Kermit, Texas, to a rodeo family, Sharp rode his first steer at the age of nine and never looked back. In 1981, he won his first of four (1981, 1983-85) bull riding championship titles in the American Junior Rodeo Association and went on to win the Texas High School All-Around title in 1984.

As a rookie in the PRCA in 1986, he won the Resistol Rookie of the Year and Texas Circuit Rookie of the Year titles in the bull riding and set a new record for most money won in a rookie year ($100,160). He also qualified for his first of seven consecutive trips to the National Finals Rodeo.

In 1988, he rode his way into the history books by becoming the first bull rider to ride all 10 bulls at the National Finals Rodeo. The record-breaking performance earned Sharp his first of two PRCA world titles. The following year, he won the NFR bull riding average for the second consecutive year and in 1990, he won his second world title. His last year to qualify for the NFR was 1992, when he picked up his third bull riding average title.

Known as “The Razor”, Sharp has been quoted as saying, “(My favorite memory was) when I rode 10 bulls at the NFR and won the world championship.” 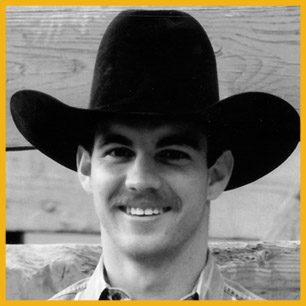