Considered the strongest man ever to ride bulls in professional rodeo, George Paul once made qualified rides on 79 bulls in a row. In 1968 he won the world bull riding championship. Born March 5, 1947, in Del Rio, Texas, and the heir to a million-acre ranch, he did not have to ride to make a living. He just loved getting on bulls and from the outset was determined to be a world champion. In his first year of professional competition, Paul finished second in the National Finals Rodeo bull riding aggregate; finished 13th in the world all-around standings and 17th in the bareback riding standings; and won money in bull riding at 30 rodeos. A pilot who owned his own airplane, Paul was killed while flying between rodeos in Colorado and Wyoming on July 30, 1970, cutting short what surely would have been a brilliant career. 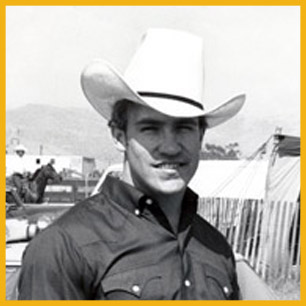