Frank Schneider always said it was “probably environment” that got him into a career in professional rodeo because his older brother, Johnie, was already a top hand when he started out riding calves. What carried him to the elite level of the sport all resided within him. His talent. His competitive fire. His hard work.

Frank Schneider started working for stock contractor Cuthbert “Cuff” Burrell in Hanford, Calif., when he was 13 years old, helping with the bucking stock and race horses at the ranch, becoming a skilled all-around hand. While he had his greatest success in bull riding, including four wins at California Rodeo Salinas and another at Prescott, Ariz., he was a threat to win in any one of a half dozen events.

Schneider won the bulldogging championship against an international field at the 1936 Royal Easter Show in Sydney, Australia. In 1932, he set a world record of 2.5 seconds in the steer decorating at the Los Angeles Rodeo that stood for many years. And his proudest achievement was winning the saddle bronc riding title at the inaugural Grand National Rodeo in San Francisco in 1941, because the win came “against the best in the sport,” and on a Harry Rowell horse, Starlight, that had not been ridden. 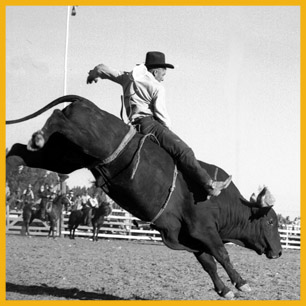