Bob Wegner was one of the greatest bull riding stars in an era populated with the likes of Jim Shoulders, Harry Tompkins, Freckles Brown and Ronnie Rossen. Over an 11-year span from 1956-1966, Wegner finished among the top five bull riders in the world standings 10 times, earning a gold buckle in 1964 and setting an event record – later tied by Ted Nuce – by claiming four reserve world championships (1958-59, 1961, 1966).

The Ponca City, Okla., native joined the Rodeo Cowboys Association, precursor to the PRCA, in 1953 and, despite suffering a broken back a year later when a horse fell on him at a rodeo in Henderson, Texas, Wegner quickly earned his place among the elite of the cowboy sport.

In his prime, Wegner could use his feet – and get out of a jam – as well as anyone since Shoulders was at his peak. Bull riders also talked about the way “Weg,” as he was known by his contemporaries, could use his inside leg – pulling it high like a jockey – and let the bull throw him back up when he started down, inside a spin. 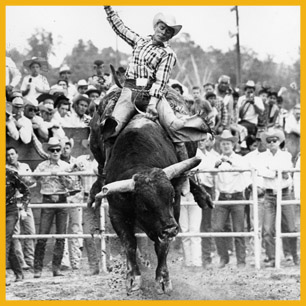