Jack Buschbom, born Oct. 6, 1927, in State Center, Iowa, survived two serious accidents with horses before he ever started in ProRodeo. The son of a stock contractor and former rodeo contestant, Buschbom began competing at age 17 as a bull rider. Three years later, he concentrated on learning to ride broncs bareback, and in just two years, he was a world champion for the first time. He also won the world crown in 1959-60. Buschbom was the first home-grown Midwesterner to make it big in professional rodeo, and he was among his event’s leaders throughout his career. His lay-back, wild-spurring style was eventually copied by most contestants. In 1960, Buschbom served as president of the RCA, the forerunner of the PRCA. 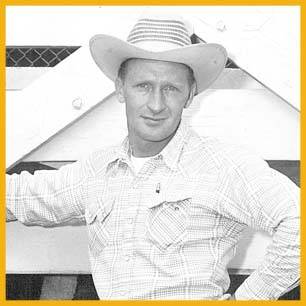