His rodeo career began when Gerald Roberts was 13. He ran away to join a wild west show and was hooked. Four years later, Roberts was riding bucking horses and bulls in the Cowboys Turtle Association.

Roberts competed in all three roughstock events. Saddle bronc riding was his favorite, but he continued to ride bulls because he said he won more money at it and “couldn’t afford not to.” Form 1945-1955, he finished in the top five in the bull riding eight times, and in 1950, he won the North American All-Around Championship and at the Calgary Stampede.

Roberts worked several years as a Hollywood stuntman and later became involved in manufacturing rodeo equipment and clothing, starting with bull ropes. The purchase price of the rope included a tip sheet from Roberts. 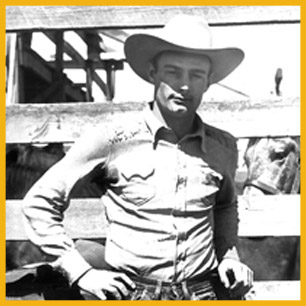