Sometimes referred to as the Jackie Robinson of professional bull riding, Myrtis Dightman made history in 1964 when he became the first African-American to compete in the National Finals Rodeo and he went on to compete on rodeo’s biggest stage six more times in a brilliant career that spanned three decades.

Dightman finished the regular season 17th that first NFR year, when he competed at the Los Angeles Sports Arena as an injury replacement for Carl Nafzger. Two years later, Dightman made history again by becoming the first African-American to qualify for and compete at the NFR. He finished eighth in the world standings that season.

In 1967 and ’68, Dightman finished third and fourth in the final bull riding world standings, and was seventh in 1972, when he made his last appearance at the NFR.

Dightman won numerous major rodeos in his career, including the Calgary Stampede in 1971, and the Cheyenne (Wyo.) Frontier Days in 1972.

His success in the arena led to Dightman being featured in advertisements as the black “Marlboro Man” and he played a bull rider in the movie “J.W. Coop” with Cliff Robertson and he had a small role in the movie “Junior Bonner” starring Steve McQueen.

Dightman’s career got its start in the 1950s when friend James Francies was riding bulls and Dightman thought it would be a treat to travel down the road with him. Dightman began as a rodeo clown/bullfighter, but it wasn’t long before he tried his hand at riding bulls.

Dightman acknowledged the transition to riding bulls was made easier for him thanks to the help and advice he received from African-American bull riders Freddie Gordon, Willie Thomas and James Thomas. 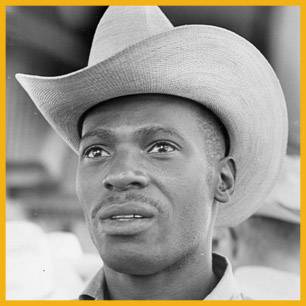