*Inducted as a pair with John Farris.

John, a PRCA member since 1959, competed in bareback riding, saddle bronc riding, bull riding and tie-down roping from 1959-75. John has worked every Wrangler NFR in on capacity or another since1967. John has staked the barrel racing pattern at the Wrangle NFR since 1967, worked as the NFR saddle horse boss for two years, served as the assistant roughstock event chute boss on year and as the timed-event chute boss for 17 years. He was the Texas Circuit Man of the Year in 1997 and has worked as a chute boss for the Dodge Texas City Circuit Finals for 20 years. John, received the WPRA’s Outstanding Individual Award in 1999 and won the Texas Circuit Best Footing Award in 2001. 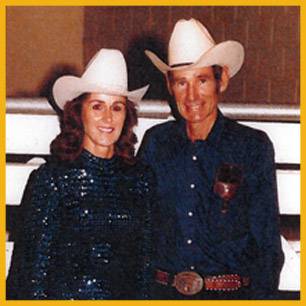 PRCA Secretary of the Year

WPRA Woman of the Year

WPRA Secretary of the Year