On the competitive side, Youree was among the top 15 a total of six times and won the WPRA all-around title in 1966, but it was her services to the GRA/WPRA in an administrative capacity that she really made her mark in the sport. Youree served the association as a director, then President from 1960-64 and then secretary-treasurer where she made the biggest impact. It was during that time that Youree worked to get the barrel racing included at the National Finals Rodeo as one of the main events. With the help of 1990 ProRodeo Hall of Fame inductee Clem McSpadden and Oklahoma Chamber of Commerce manager Stanley Draper, the barrel racing became a featured event at the NFR in 1967.

Youree was fortunate to have competed at the NFR in 1967 and her legacy has been passed down to her family with daughter Renee Youree-Ward making the NFR in 1985, granddaughter Janae Ward-Massey in 2001-03, winning the WPRA World title in 2003, and another granddaughter Kylie Ward Weast qualified in 2018.

Youree and husband, Dale, produced GRA All Girl rodeos, was the first to host barrel racing camps, training many future WPRA World Champions and they started the Oklahoma Youth Rodeo Association. They also started the Barrel Futurities of America (BFA) that changed the barrel racing landscape and Youree served as their president for 18 years. 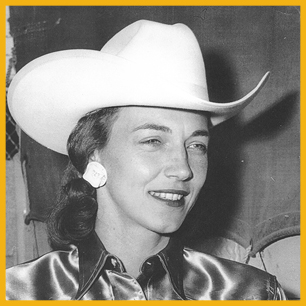