After encouragement from friend and bullfighter Michael Moore, Coffee began fighting bulls instead of riding them. His signature act of dancing in front of an angry bull earned him the nicknames “Disco Bullfighter” and “Boogie Man.” As a PRCA Gold Card Member and NFR barrel man, Coffee enjoyed a long and lively career in ProRodeo as one of only three cowboys to be both a barrel man and a bullfighter at the NFR.

Coffee has worked on the movie sets of 8 Seconds, My Heroes Have Always Been Cowboys and Jericho (2000). He visits children’s hospitals and runs a small ranch in his off time.

“I enjoy putting smiles on faces, and my motto of life is God put me on Earth to do two things – make people happy and help people out, and I can do both in the arena,” Coffee said. 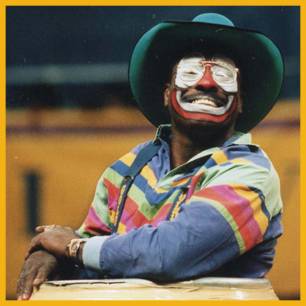