John Quintana was one of the great rank bull riders of all time, not only claiming the 1972 world championship over fellow ProRodeo Hall of Fame inductees Phil Lyne and Larry Mahan, but breaking the world record for highest-scored bull rides twice in the 1970s.

The first of these records came in 1971 when Quintana rode Billy Minick Rodeo Company’s V61 in Gladewater, Texas, for 94 points. He came back in 1974 to advance the record again with a 96-point ride on Beutler Brothers & Cervi Rodeo’s No. 17 at the Helldorado Days Rodeo in Las Vegas.

Quintana qualified for the National Finals Rodeo in six consecutive years (1969-74), winning the gold buckle in 1972 and finishing among the top six on three other occasions. He earned checks in 18 NFR rounds.

Quintana was quiet and let his actions speak louder than words. His attitude was if he didn’t have a bull to win first on, he didn’t care about second or third. Quintana’s secret to success was a positive outlook.

Quintana moved to Australia in the 1980s to build a cattle empire. At one time, he owned both the Killarney and Waterloo Stations, totaling more than 2.5 million acres in the Northern Territory, and ran 80,000 head of cattle.

Quintana died when the plane he was piloting crashed just after take-off from Roma Airport in western Queensland, Australia, on March 25, 2013. He was 65. 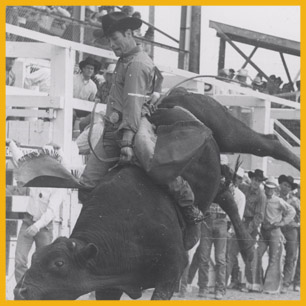