Gary William Kirby, better known as Butch, started his rodeo career at age four when he joined his brothers in a trick riding troupe led by his mother, Mildred. By 16, he had changed his specialty to bull riding. Kirby credits the agility and balance of trick riding as helping with his transition to rodeo’s roughest event.

Kirby would make three more trips to the National Finals Rodeo before transitioning to his third career in rodeo. Kirby began judging rodeos to earn money while recovering from an injury in 1987. He became a Pro Official in 1993 and has served in that capacity at many of the major rodeos in the country. He has been a National Finals Rodeo Official for 30 years.

Through this long and decorated career, Kirby has participated in every major rodeo as either a contract act, bull rider, or judge. 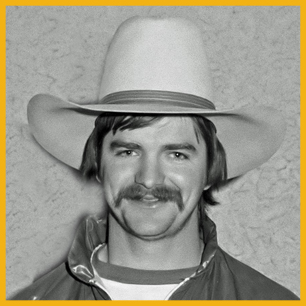