Kristie Peterson’s rise to stardom in the Women’s Professional Rodeo Association started in 1989, when she was working as a captain at her local sheriff’s department overseeing the jail and dispatchers but decided to try her hand at professional rodeo after earning titles in youth and amateur rodeo. Peterson jumped into the fray with a talented gelding she’d trained and brought through futurity competitions, a horse named French Flash Hawk, better known as Bozo.

Following on the heels of Charmayne James and her great horse, Scamper, Peterson and Bozo ended James’ streak of 10 straight world titles, claiming the first of four WPRA world titles in 1994. She finished second in 1995 before rattling off three straight championships in 1996-98.

Peterson and Bozo placed in 20 consecutive rounds at the NFR in 1996 and 1997, a feat unmatched in history at the time of induction. Bozo retired from competition after winning Rodeo Houston for the third time in 2003 and Peterson soon followed, though she continued to ride and train horses. Peterson recorded $1,346,861 in career earnings, becoming the second WPRA cowgirl to cross $1 million. 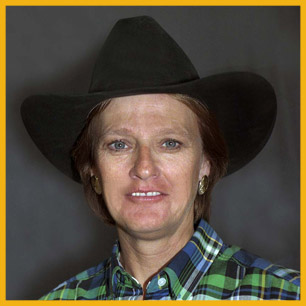