Jake McClure always dreamed of becoming a successful rodeo roper. At age 2, he carried around a clothesline, and by 5, he was successfully roping cats, dogs, chickens, goats and other kids. His father, set on his youngest son acquiring a good education, believed young Jake would outgrow his fascination with roping. By 16, McClure had traded in school for the rodeo trail, roping calves from California to New York. McClure’s style featured a small loop used with fast action, thrown like a rock. The combination of his style and his great coordination with his horse led to his world championship title and victories at all of the big rodeos. McClure was named all-around champion at the 1930 Pendleton Round-up; was awarded the Arizona State Championship cowboy title in 1932; and earned the all around cowboy title at Phoenix in 1937 and Houston in 1939.  McClure set the world record of 12 seconds flat in 1934 at the London, England, Rodeo. Quiet and unassuming, McClure was a favorite with his fellow cowboys, rodeo officials and spectators. As the dominant tie-down roper of his era, he has been called the cowboy who revolutionized the event, bringing lasting changes to the sport. He was born in 1903 and died July 19, 1940. 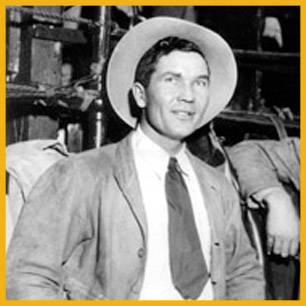