Les Hirdes started roping in 1943 when he traded a calf for a roping horse. At one time, he worked all of rodeo’s timed events, tie-down roping, steer wrestling and team roping. Beginning with the first National Finals Rodeo in 1959, Hirdes made 17 trips to the NFR. During that time, he roped with seven different partners and earned two NFR aggregate titles and won the 1963 world title. His skills at the heading end of the steer were legendary with his peers. Hirdes, born Sept. 21, 1923, in Tipton, Calif., never considered that he was competing in rodeo for a living. He saw it as extra money to support the family dairy farm where he worked all week so he could compete on weekends. Hirdes continued to rope into his mid-70s, when he was forced to give up riding because of Parkinson’s Disease. He still went to rodeos and the family practice pen to cheer on the next generation. Hirdes died June 19, 1999. 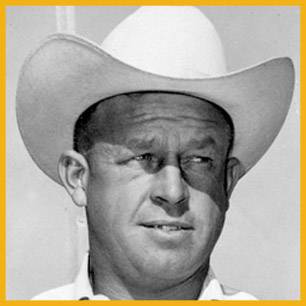