Jim Rodriguez grew up in a roping arena owned by his father, applied his early training and individual skills to team roping and won four world championships. Rodriguez, born Sept. 9, 1941, in Watsonville, Calif., was the youngest man to win a team roping title, taking his first championship at age 18 in 1959. Setting records does not stop with that achievement. He finished in the Top 15 for 19 consecutive years, thereby qualifying for the National Finals Rodeo, records that are sure to stand for many years. Around the home arena, Rodriguez met the world’s finest team ropers. He received coaching from several of them, but upon teaming with all-time great Gene Rambo, the perfect combination resulted in two championships in a row. 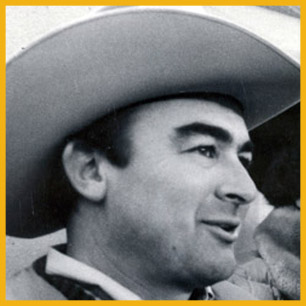