Dale Smith, an all-around timed-event cowboy from Safford, Ariz., won consecutive world team roping championships in 1956-57 and missed a third by just $13. In 1959 he went to the National Finals Rodeo in three events – team roping, tie-down roping and steer roping – becoming the first man in ProRodeo history to accomplish that feat. Now a successful rancher, Smith, born Feb. 6, 1928, attributes his success in business to professional rodeo. In appreciation to the sport, he has devoted his time and administrative talents to the RCA/PRCA since the 1950s, when he was elected team roping director on the Board of Directors. He later served as president of the Association for 16 years, longer than any other person. Smith successfully led the Association through some of its darkest hours when it was under attack by radical humane groups, entertainment unions and organizations determined to take over the sport. 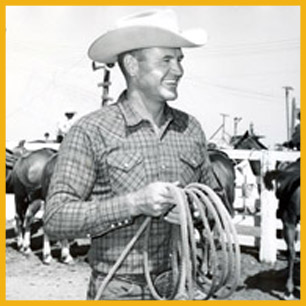