Lynn Beutler of Elk City, Okla., was an integral part of professional rodeo for 40 years, becoming one of the sport’s most widely known stock contractors in the family rodeo company known as Beutler Brothers. The company, started in 1929 with Lynn, Jake and Elra Beutler, was recognized as one of the top stock contracting firms producing rodeos across the Southwest and Northwest. The most noted animal in the Beutler string was six-time Bucking Horse of the Year Descent, a palomino gelding. Lynn purchased the horse from Art Douglas. In 1954, Elra Beutler branched out on his own and 12 years later, Lynn and Jake sold the firm’s name, trucks, trailer, tack and all bucking stock to Mike Cervi of Sterling, Colo., who changed the name to Beutler Brothers & Cervi Rodeo Co. Lynn stayed on as a consultant with Mike Cervi until 1969. Lynn was also instrumental in the rodeo business, planning and producing the first National Finals Rodeo in Dallas in 1959. For the next 17 years, he served as an elected representative for all PRCA stock contractors on the NFR Committee. An astute businessman, always colorfully attired, his rodeos were smooth, fast-paced productions with top stock. Lynn died April 29, 1999. 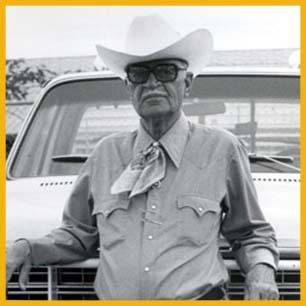